Redazione SoloTablet
share
BIBLIOTECA TECNOLOGICA - A far-reaching and strikingly original collection of essays on the “culture of software” by British new-media critic Matthew Fuller, Behind the Blip looks at the many ways in which the ostensibly neutral user interfaces, search engines, “intelligent agents,” and word processors that are now part of our everyday life are actively reshaping the way we look at and interact with the world.

There are two questions which I would like to begin with. First, what kind of critical and inventive thinking is required to take the various movements in software forward  into those areas which arenecessary if software oligopolies are to be undermined? But further, how are we to develop the capacity for unleashing the unexpected upon  software and the certainties which form it?

Second, what currents are emerging which demand and incorporate new ways of thinking about software?One of the ways to think about this problem is to imagine it as a series of articles from a new kind of computer magazine.

What would happen if writers about computers expanded their horizonsfrom the usual close focus on benchtests and bit-rates? What would happen if we weren’t looking at endless articles detailing the functionality of this or that new version of this or that application? What if we could think a little more broadly—beyond the usual instructional articles describing how to use this filter or that port? What, for instance, would it mean to have a fully fledged “software criticism”? First, let’s look at what already exists. Certainly, we are not short of examples of prior art. In terms of the academy, sociology, for instance, offers: Jeannette Hofmann’s descriptions of the gen-

dering of word processor software and its patterns of use within work; Paul N. Edwards’s history of the development of computer technologies through the models of  science promotable at theheight of the early cold war; Michael R. Curry’s formulation of a technico-aesthetic economy of signification and ownership in geographic information systems; Donald MacKenzie’s work on the political implications of floating-point-unit calculations in the design of missile guidance systems — the list goes on and extends to substantial areas in ethnography and anthropology.

Material based around philosophy and literature includes Michael Heim’s Electric Language and the contributions of Friedrich Kittler, despite his assertions that the object of attention here does not exist. Wecan also look to texts which come out of bookshops, but that don’t get libraried up so much: Howard Rheingold’s Tools for Thought and J. David Bolter’s Turing’s Man, for instance.

This list is certainly short, but it does continue. The creation of imaginary bookshelves is as good a way of thinking through combinations as the imaginary museum, and there are three areas in particular whichseem to offer elements recomposable into a more thoroughgoing strand of thought about and with software. 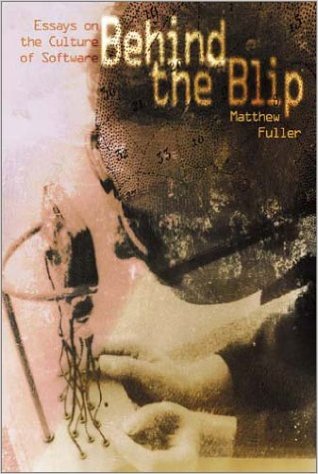 Alternative Apps design and develop applications for iPhone/iPod and iPad.