Computer Power And Human Reason: From Judgement to Calculation

Computer Power And Human Reason: From Judgement to Calculation

Redazione SoloTablet
share
BIBLIOTECA TECNOLOGICA - Computer Power and Human Reason: From Judgment to Calculation (1976) by Joseph Weizenbaum displays the author's ambivalence towards computer technology and lays out the case that while artificial intelligence may be possible, we should never allow computers to make important decisions because computers will always lack human qualities such as compassion and wisdom. Weizenbaum makes the crucial distinction between deciding and choosing. Deciding is a computational activity, something that can ultimately be programmed. It is the capacity to choose that ultimately makes us human. Choice, however, is the product of judgment, not calculation. Comprehensive human judgment is able to include non-mathematical factors such as emotions. Judgment can compare apples and oranges, and can do so without quantifying each fruit type and then reductively quantifying each to factors necessary for mathematical comparison. (Wikipedia)

Joseph Weizenbaum, a professor of computer science at MIT, has participated in the development of Artificial Intelligence since its conception in the late 1950's. His most famous accomplishments are SLIP, a list-processing language, and ELIZA, a natural-language processing system. Computer Power and Human Reason is a collection of essays discussing the technical roots of computer systems, and addressing some philosophical questions inspired by mankind's entrance into the world of machines.

Perhaps the most curious thing about Mr. Weizenbaum's book is its candid ambivalence towards computer technology. From a man who pioneered the use of the computer chip as a fabulously powerful tool, it is strange to hear doubt and questioning about the purposes of his research, and the validity of its results. Mr. Weizenbaum says his book is an explanation of a philosophical problem that presented itself when he created ELIZA, the natural-language processing system that imitated a Rogerian psychologist and communicated in a way that practically sounded human. He compares his philosophical crisis to a problem encountered by Michael Polanyi, professor of physical chemistry at the Victoria University of Manchester. Polanyi was thrown into an intellectual muddle after Nicolai Bukharin, theoretician of the Russian Communist Party, asserted that socialism would eliminate the need for pure science, and only practical matters would be addressed by the enlightened communist scientists of the future. To Polanyi, disregarding pure science would enslave man to the need to create only for the sake of production and efficiency, and would destroy any opportunity for free thought. Polanyi feared that Bukharin's prediction would inspire a solely mechanistic view of man. Weizenbaum had a similar experience shortly after offering ELIZA to the scientific community.

Computer Power and Human Reason is Weizenbaum's exploration of his own misgivings about technology and Artificial Intelligence. It is more philosophical than technical, but offers a few detailed chapters that provide a foundation for the person who is not a computer scientist.

Weizenbaum created ELIZA in order to demonstrate natural-language processing in computer systems. Though ELIZA was capable of carrying on a human-like conversation, Weizenbaum never intended for ELIZA to be a substitute for human interaction. He was appalled when psychiatrists suggested that the program might be an acceptable substitute for human therapy. Even Weizenbaum's own secretary, who was intimately aware that ELIZA was a machine, conversed with the computer on a number of personal matters. Horrified, Weizenbaum began work on the philosophical problem presented by the mechanization of human characteristics and talents.

From the beginning of the book, Weizenbaum insists that science is only one approach to understanding the universe. At one time, art and literature were considered essential tools of making sense of mankind's place in the world. Now, science is the only legitimate method of understanding, (a mistake made by Bacon when he equated rationality with equality), and art has been relegated to the ignoble role of entertainment. We are obsessed with scientific procedure and thoughts, insists Weizenbaum, and he adds, "We can count, but we are rapidly forgetting how to say what is worth counting and why." (p.16)

The first half of Computer Power and Human Reason is devoted to explaining the technical side of computer science. Weizenbaum goes into a lengthy explanation of tools and their purposes, and establishes the computer as a modern day arrow--as a tool and an extension of man's power. He then explains how a computer works mechanically, examining our notions of the brilliance of computers by revealing how clumsy they are, and how awkward the mechanics of computer computation. Computers simply operate quickly, he says, but not with much grace.

In the second half of the book, Weizenbaum looks at common applications of computer power such as computer models in psychology, natural-language, and artificial intelligence. These chapters are scarcely technical, but address theoretical and philosophical issues. Chapter eight, devoted to the subject of artificial intelligence, criticizes the scientific community (the Artificial Intelligensia) for blindly pursuing the nebulous path of technological progress. Weizenbaum demands that the community consider ethical and moral issues associated with the development of machines that can imitate human behavior. The real question for the Artificial Intelligensia, he says, is not what computers will be able to do, but what we should allow them to do.

In chapter ten, entitled "Against the Imperialism of Instrumental Reason," Weizenbaum flatly denies that human intelligence can be formulated by machine-responsive equations and rules. He marks the decline of our understanding of human intelligence with the popularity of the I.Q. test. The idea that human intelligence is measurable, or a purely linear and rational faculty, is absurd. A computer will never be able to imitate the wisdom and emotion displayed by the human creature.

What an odd book Joseph Weizenbaum has written! You would think he had been an instrumental figure in the notorious Manhattan project rather than a beacon in the discovery of Artificial Intelligence. Weizenbaum has seen the face of computer power, but asserts that humankind is still master of his mind and world. Computer Power and Human Reason is a picture of a scientist's inner dialogue; Weizenbaum has a mind clearly worth investigating.

Computer Power and Human Reason would appeal to either people who are just beginning to learn about computers, or who are interested in the philosophical and ethical questions presented by intelligent systems.

To look more closely at the work of Joseph Weizenbaum 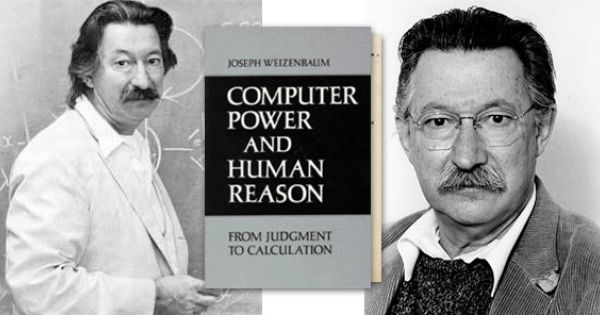 PalmoLogix is a privately held software company and technical consultancy located in...